Genekor's BRCAtest Somatic is designed to individualize the treatment of the patient based on the biology of the tumor.

BRCAtest Somatic is designed to detect the patients with inherited and non-inherited BRCA1 and BRCA2 genes mutations that could benefit from treatment with PARP inhibitors.
Mutations in the BRCA1 and BRCA2 genes lead to an increased risk of developing breast or ovarian cancer as part of hereditary breast-ovarian cancer syndrome. Recent studies have shown that these genes can also be involved in the development of non-hereditary, sporadic tumors, since a proportion of ovarian, breast cancer and prostate cancer tumors contain somatic (tumor only) BRCA1 or BRCA2 pathogenic variants. Patients with tumors that harbor a somatic BRCA mutation may benefit from treatment with PARP inhibitors.

It has been shown that somatic BRCA genes mutations in patients with advanced ovarian cancer are predictive biomarkers of sensitivity to inhibitors of poly (ADP-ribose) polymerase (PARP) enzyme, which plays a critical role in the repair of damaged single-stranded DNA. 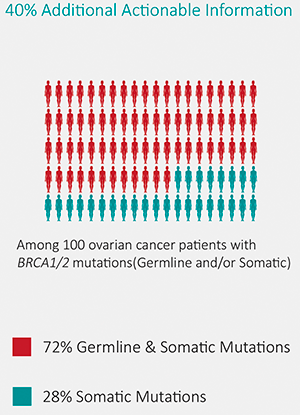 Our dedicated Client Service Team is committed to answer your questions with regards to the services offered by Genekor. If you would like to order any of the tests that Genekor performs please contact us directly.

If you would like to send us your sample,

contact us in order to arrange for all the logistics.

you are already aware of the process of sending a sample, in order to download all the related forms.